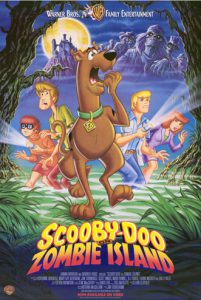 I never liked Scooby Doo as a kid.  First, Scooby Doo was a moron.  I always wanted my heroes to be, well, heroes.  Second, the ghosts never ended up being ghosts.  Why did it have to be Old Man Harvey from the Carnival?  Why couldn’t it just be a ghost?  Much more exciting that way.  But this isn’t about me.  This is about my 4 and 7-year-old who do happen to like that idiot dog and his doped-up sidekick (though they’ve never watched Scooby with me).  It’s not scary (it’s always fake) and they find it funny.  So when I rented Scooby Doo on Zombie Island…oh my.

Spoiler Alert!  Turn back if you do not want to ruin Scooby Doo on Zombie Island!

And you know what?  They’re all real.  Yes, the ONE FREAKING SCOOBY DOO WITH REAL BADDIES is the one I let my daughters watch.  The zombies?  Yeah, they have rotting flesh, with limbs falling off.  The back story: the villagers were forced into the alligator-infested cove by marauding pirates and we get to see the alligators close in.  The pirates?  Bad asses who eventually get eaten by cat people.

I kept hoping, pleading…but Scooby Doo is safe! Not this one.  Cordelia is crying so hard that she has snot dripping down her nose.  I was like the gambler who just couldn’t quit becuase in the next two minutes it’ll all turn out to be fake. Except it never did.  Sure, sure, the zombies ended up being good guys, and the cat people exploded in bones and dust.

Seriously, Scooby, what were you thinking?  Couldn’t you have warned me that this was the one episode where the freaking ghosts are real.

Scooby — you may go to hell.