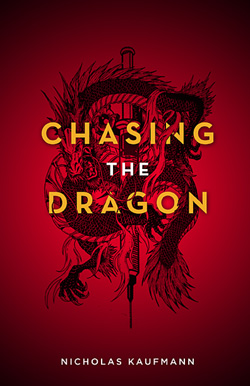 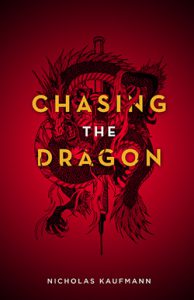 I’ve been impatiently waiting for this title since it was announced by Chizine Publications (the little press that could…these guys rock).  I was actually going to pick it up at Ad Astra, but I decided to pick it up on Saturday when I was at Chapters in Edmonton for my own book signing.

Synopsis: St George and the Dragon. A lie.  Poor George didn’t defeat the Dragon but was eaten.  The quest fell to his descendants, who also failed.  Right up until present day when Georgia takes up the mantel from her father.  Childless, she is the last of the line.  It is up to her.

Hell, that alone is a catch, isn’t it?  Except poor Georgia is a drug addict.  Heroin (thus Chasing the Dragon).  More and more I’m liking these novella-length works.  You can go a little crazier, do a little more — without worrying about the weight of the thing collapsing under the length of a novel.

Kaufmann is an outstanding writer.  Sparse descriptions that instantly crystallize the setting.  Great uses of threads and flashbacks.  Since it’s a novella, there really is only one narrative stream — but his use of flashbacks and dream sequences makes it feel much larger than it is.

The main character Georgia is a real anti-hero — running from her destiny, she hits rock bottom, gets hooked, then takes up the task of defeating the Dragon…all the while trying to figure out where to score her next hit (is it a hit with heroin?  I have no idea…whatever it’s called).

Exploding cars, shotguns, undead, dragons, drug addicts, gangs…it moves relentlessly, giving us enough of a breather to sprinkle the backstory of not only how Georgia came to be a Dragonslayer, but a drug addict.

If I had to label one negative (and it was a small thing) it was the climax.  I don’t want to give away whether poor Georgia succeeds — but let’s say it didn’t quite hit the right note for me.  It was close, but I would’ve liked it slightly different (it felt inevitable…so when it didn’t happen the way I had anticipated, it didn’t feel quite right).  That wouldn’t be enough, however, to knock it from a five-star review.

Another hit from Chizine Pub (man, these guys know how to do books– from the writing, to the covers, to even their website).