An Editor and a Publisher Walk Into a Bar: Who Do You Hit On? – Part 1 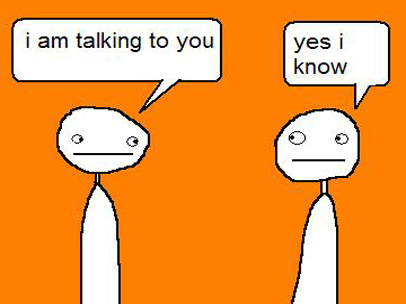 I recently attended When Words Collide, “a festival for readers, writers, artists and publishers of commercial and literary fiction, including genre, YA, Childrens books, and Poetry.” (description from their website). (Steve from IT here: “Thanks for leaving me at home. It’s not like I had anything better to do than stay here in my basement.“)

My first panel was Etiquette of Your Literary Pitch. This theme was similar to another panel I was on previously at Ad Astra: An Editor and a Publisher Walk Into a Bar: Who Do You Hit On? Why do I gravitate to these types of panels? Am I a pitch virtuoso? (IT Steve: “Hahahaha!”) Nope. But hear (read) me out.

There are lots of sites that can tell you about *how* to make your pitch, but not a lot will talk about how you get to approach that agent/editor/publisher — because that can be just as important as making the pitch (quite frankly, I think it’s more important than the pitch itself).

I’m going to switch over to a real-estate analogy (I used to flip homes). Before the buyer has even walked into your house, they already know whether they want to buy it or not. That’s right: the driveway, the yard, the garage, the neighborhood — all factor greatly into whether they even want to *see* what’s on the inside. It’s your sale to lose (hey, you can still lose it…maybe the kitchen is too small, or the bathroom is avocado green, or the interior of the house sucks). So these series of articles won’t be about how to fix your house (book). That’s your job. What this focuses on is the etiquette (and success) of making your pitch.

(Steve calling from IT: “Enough already! What the hell is the answer? The suspense is killing me. Who do I talk to? The editor? The agent? The Publisher? Just tell me? Who do I attack talk to in the bar?”)

(Steve from IT here: “that’s actually a trick question, because that wasn’t an option. Trick questions are lame.”) Because chances are you won’t get close to them. As Robert J Sawyer says on his website: “My own agent goes to the World Science Fiction Convention but doesn’t do any programming and hangs out at the hotel bar not wearing his name badge in part so he won’t be approached by wannabes.”

(Steve again: “WTF, dude! This whole post is a setup! This is your very own Koboyashi Maru scenario – you don’t even know, that that is a Star Trek reference, do you? You suck.) There is an answer. Who do you hit on? The writers. (Steve here: “I was kinda hoping for a secret handshake or something. Plus, make sure when you’re putting emphasis on words that you close the tags…oh sorry, continue with what you were saying.“) There are no secret handshakes…only regular handshakes that leads to…Networking. (Steve Labowski checking in: “Yay! I love networks. Oh wait, ugh, I don’t want to network with…people.”) 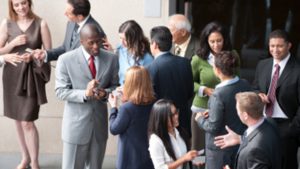 Picture yourself in that photo and imagine that you don’t know anyone (Steve sending the love: “Is that a royalty free picture? Dude, that’s stealing unless it’s royalty free“.) Does that freak you out? Well don’t worry, you don’t necessarily have to work a room like that. That photo is a generic networking picture I grabbed from online (Steve: “WTF? I told you that you can’t do that.“). I could’ve grabbed something a little friendlier (showing one of the party rooms at a literary convention) but you get the idea.

The only way to many editors, agents, and such decision makers is through other writers. There will always be scheduled pitch sessions, but then you’re one face out of a thousand. You want them to remember you (for all the right reasons). I have an online friend named Matt Yocum…we both got our first deals together (which then promptly collapsed when the press folded), but what he really wanted to do was write for Spider-Man comics. Rather than pitch the editor at the convention, he *won* an auction with a prize to have lunch with a top exec at Marvel comics. He made sure to use that lunch to…pitch his ideas (and yes, they bought some of his ideas).

Many will have their stomachs tighten at the mere thought of networking. That’s scary, time-consuming work. Yes, it can be, but it doesn’t have to be scary. Honestly. You might have to leave your comfort zone, but it gets easier and easier….(to be continued in Part 2 released on December 1st. Sign up for my newsletter.)