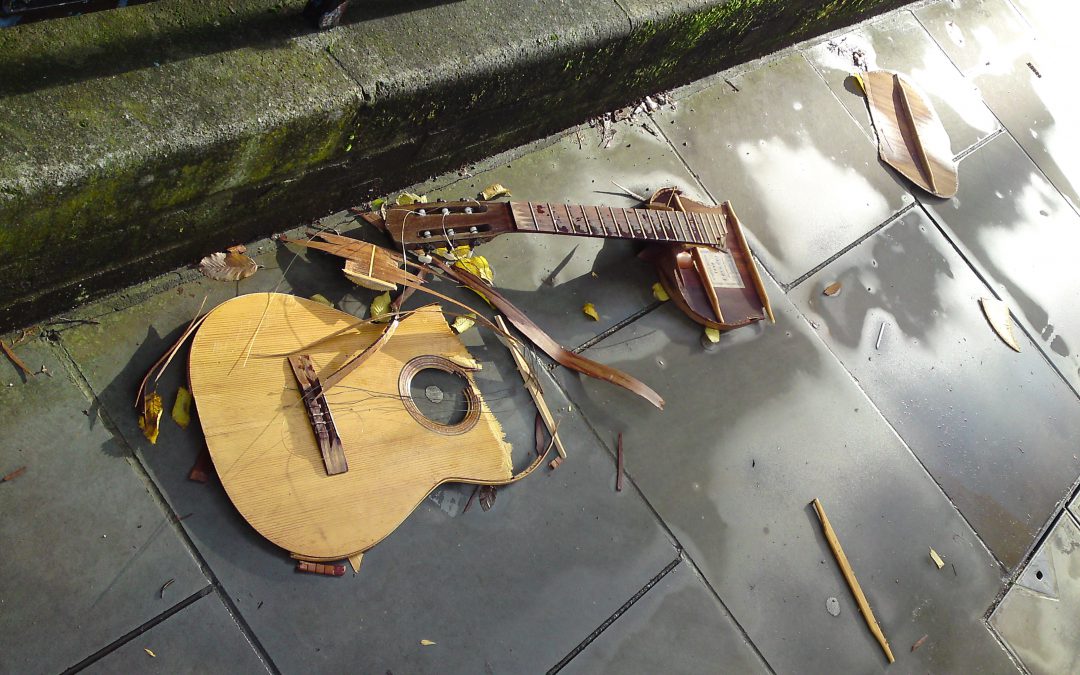 I had a fair amount of interest in it — again $75.  I had a bunch of people lined up to come see it one weekend two months ago.  There were two notables: the first on Saturday, and the second on the Sunday. They asked me lots of questions about it first.   I sold it to the first guy who saw it.  Some young kid named Dustin.  Now, this guitar came with a quick explanation:

Why are you selling it: because it turns out I’m not very musical and I don’t use it

The Price is a little high, will you come down? No, if you really want a cheap one, go to Excess Cargo.  They sell for $70.

So Dustin gives me $75 and goes on his way.I get this email the other day (two months later):

BTW this guitar you sold me wasnt in perfect condition – your new bridge is crooked and is pulling sooo tight on the strings that there is a huge bump on the body right below the bridge. The night I took it home, I realized it but didnt know anything about guitars so I thought nothing of it…. My guitar teacher saw it cause im a total beginner – thats probably why you were in such a rush to sell it! Way also to jack up the price, I guess the pressure could pull it apart any day.
If you get back to me the honest thing to do is to give me my money back and you can have the guitar back.

As a compromise I will take $100.00 back – and give you the guitar, I need that money so I can buy something that isnt gonna fall apart, iam pretty upset but I would really appreciate it if you could get back to me.

I wasn’t going to reply.  I made it fairly obvious it was a buy-at-your-own-risk type affair…as well, it’s been two months, and they’re asking for an additional $25!
I replied:

When you’re asking for your money back, you shouldn’t preface your email by calling the person a cheat and a lair.

They sent me a few threatening emails saying ‘what goes around, comes around’ and what not and I actually considered giving them $50 back. I consider myself pretty honest on Kijiji. If something’s broken, they can bring it back (only one person ever took me up on this…and they ended up keeping it anyway).

However, after another threatening email, I finally reply:
– I told you I knew nothing about guitars. The condition it was in was same condition I bought it. I don’t know how to play and I don’t know anything judging the condition of guitars.
– Anxious to sell it to you? Whatever. You sent me emails over 2 weeks asking about it.
– Jack up the price? I bought it for way more than that. I TOLD you that if money was a huge issue, go buy one from Excess Cargo.

Wow,
And I’am lost I paid you 140 for the guitar 2 weeks ago. Im sooo lost.
You said you’d been playing guitar for 3 years, and were getting rid of this one because you were getting a new one. You never said anything about Excess Cargo, and I never said anything about money being an issue. You wanted to meet me in a panic, and were asking me to leave work early and do all of this stuff, wanting me to come to your work and then changing your mind. You work at the beer stock in North London, the one on Sarnia right???
Oh well, like I said what goes about comes around, I have all of the emails and text messages to prove it.

You know that you sold be a bum guitar. Wow, I have never actually dealt with some this deceptive… This is all very strange to me, its actually worrisome that you are completely fabricating a total lie. It wont work for you very long, your a young guy and soon enough you will learn.

Huh. So now it finally clicks in. I’m not talking to the same person. I know what you’re thinking: but, Ryan, how could you be so stupid as to not realize that this was a different person? Because (and this is where it becomes interesting)…this ANGRY person was the person who was supposed to come see it on the Sunday. She never bought it from me — but her email was in my computer, under the Kijiji ad…and I thought it was just him emailing from another account.

To make it even funnier — Dustin (the first guy) stole my Kijiji ad and posted the exact same ad (but for $140!) — which is probably why she was confused (she replied to the ad…not knowing they were different people). The second person bought my guitar from Dustin, a month and a half later, at double the price.

I sent her an email with all the correspondence and how she’s bugging the wrong guy.

Oddly, I haven’t heard from her since…