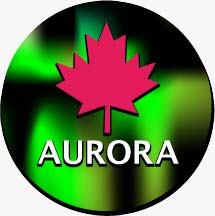 What is the 10th Circle? The 10th Circle Project is a 10-volume shared world, ebook series direct from Amazon and Kobo. It is the brainchild of myself and Eileen Bell (and we are the editors). Other writers to join us are Randy McCharles and Billie Milholland (who shared an Aurora award with us from 2009). You can find out more about the 10th Circle at http://www.the10thcircle.com.

The premise: After generations of conflict, the twin cities of Hope and Glory launch the 10th Circle Project, an ambitious deep earth energy venture that holds the tenuous promise of peace and cooperation. As the drilling descends beyond recorded depths, old rivalries simmer, mistrust and greed threaten to explode into war, and the earth begins to reveal its own powerful secrets, both divine and demonic.

The Aurora’s are Canada’s fan-voted Science Fiction & Fantasy awards. In 2009, one of my projects, the Women of the Apocalypse, won two Aurora’s. While any Canadian is eligible to vote, you must be a member of the Canadian Science Fiction and Fantasy Association (if you’ve already nominated, then you’re already a member). There is an annual membership fee of $10 BUT (and this is the cool part) if you’re a member, you get all of the 2012 nominated works as eBooks (this is all categories, including the novel, short, and related).  So really, it’s quite the deal.

Voting: Has begun, and will continue right up until July 23rd. The results will be announced at When Words Collide — a reader con held in Calgary August 10th-12th.

The 1st Circle (available from Amazon and Kobo)

Bourbon and Eggnog: A free Christmas short-story collection. Available now in ePub, mobi, and PDF.  If this is your first introduction to The 10th Circle Project e-book series, fear not. You don’t have to read the other books in the series to enjoy this collection. So, pour yourself an eggnog (or maybe a bourbon neat with a beer chaser) and curl up with our Christmas collection—Hope and Glory style. You may download this one for free at http://www.the10thcircle.com/bourbon.php