When a NO would’ve sufficed 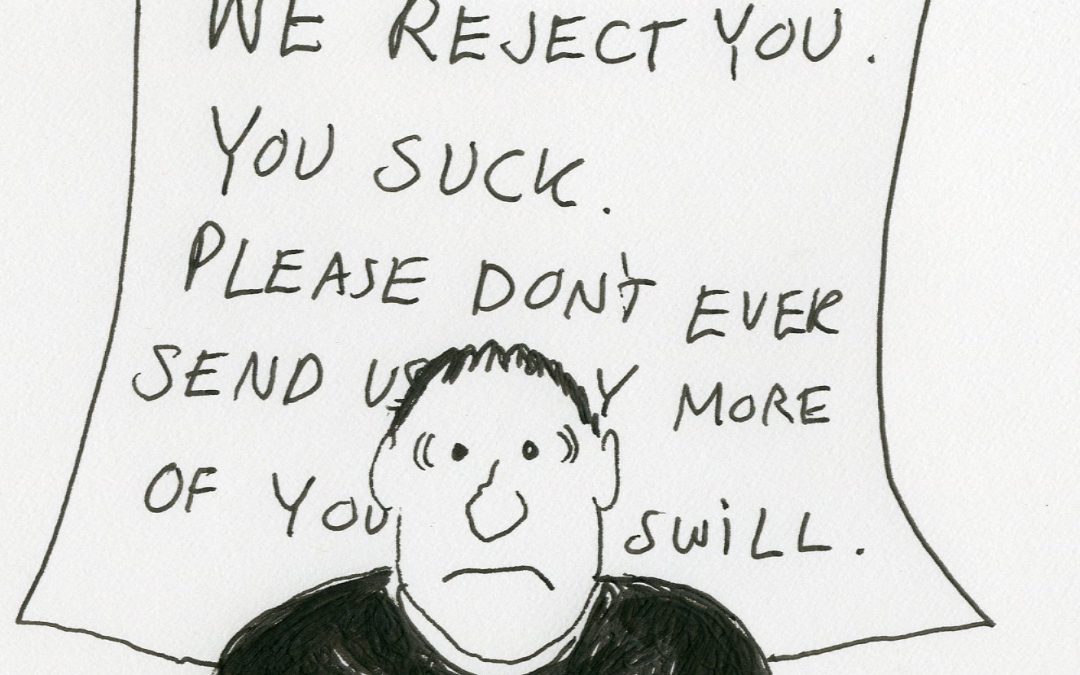 Someone asked me to write about success, and when I knew I was a successful writer. My response: “Me? Successful? HAHAHAHAHAHAHA! (wipes tear from eye).” It’s all perception, I suppose. Success stories tend to be a little on the dry side, but failure, wow, those are pretty exciting. How about a decent rejection letter? Like this one where my story actually made the editor angry.

A little context. This was for some short fiction (500 words) that I sent a fledgling press. I was sick of all the clever writers out there (why does no one focus on story!) so I wrote this little thing about a subterranean monster. If you want, you can read it here.

Here’s the rejection (bold and italics are mine):

Thank you for your submission, we are rejecting it.(okay, so you’re done then…oh, wait, there’s more).

There is nothing new in this plot, literally nothing, the changeling myth is older than the written word (wow, he starts off strong).  If you do not have an original plot then you must execute your story in a way that is better than every version that has come before you.(so you’re saying I have? Excellent) Do you believe that your tellng is superior to everyone else that has tread and retread this idea through the millenia? (Yes) Even recently in horror literature we have seen thousands of examples of child vampires abusing the maternal bond. (That sound was the sound of the editor’s jaw grinding).

The prose begins very dense and flowery before falling into a better, more natural flow further on (oh good, now we get to the positive, guess they started with the vinegar first, then are giving me sugar), the key problem with the writing style is that you seem to forget that you are writing a horror story. The purpose of a horror story is to frighten the reader. This can be achieved through techniques too numerous to list here but all of them spawn from the generation of tension. Nothing in your writing creates tension, the writing style is perfectly all right, it just doesn’t do what it needs to (Oh, there’s no sugar).

To improve this story you will need to create some original twist in the plot, something we have never seen before, because no matter how good a writer you are you are not going to be better than everyone who has ever written combined, you could add a psychological twist, possibly involving the parents dealing with this impossible situation, or you could rethink who you want the monster to be, perhaps the child is already dead when the changeling arrives and you can play out the battle of wits between the child’s murderer and the doppelganger as both would know that the other was lying.(I dunno, it’s a 500-word short story, don’t know if I’d really want to rework it)

With regards to your writing, I realise the effect you had intended with the ethereal prose, unfortunately it has no emotional effect and it jars brutally with the remainder of the story. Try to move things in a more realist descriptive direction and it will have more poigniancy.

I look forward to receiving further subbmissions from you. (You’ve been so delightfully honest up until now…why are lying to me now?)

Huh. So there you have it. A rejection letter. Might seem kinda funny, but it wasn’t at the time. I never did submit that story anywhere else…cuz I guess I got scared. It really wasn’t worth reworking (it was very short). I’m not sure why the editor wrote such a long rejection letter rather than just saying no. No would’ve been much kinder.