Every had a double-latte before bed?  The way it gurgles and churns, while the caffeine hammers your nervous system like a drugged out whore (wow, don’t know where all that came from)?  Yeah, it’s never happened to me either.  But it could’ve happened.  Well, the same thing happens when you watch back-to-back-to-back (let me count, 1, 2, 3…oops, forgot one) to-back episodes of Dexter. 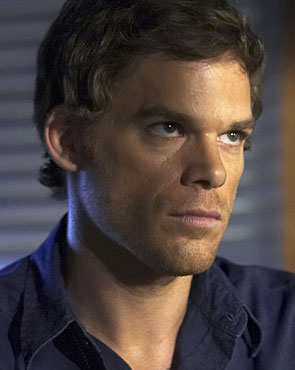 Everyone’s favourite serial killer (I have no proof of this…I’m going on gut instinct) likes to hunt the hunters (not the guys in orange jackets, but predators…no, not the predator that hunts Arnold, but predators that prey on kids and the helpless).

And sure, he’s righting the scales of justice and all that…but he still straps them to a table, slices them good, then chops them up in little pieces.  It’s a lot to digest.  It can…upset a man.

So I watched the last four episodes of Season Three (how could they top Season Two?  well, they did).  And my dreams were a little…disturbed.

It involved confinement…and let’s just say that if my dreams are any indication…well…ummm…homosexuality ain’t for me.

New rule: no lattes, or serial killers, before bed.